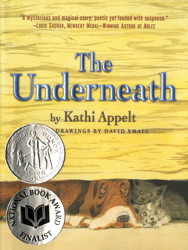 The Underneath*
Author:  Kathi Appelt
Illustrator:  David Small
Atheneum Books for Young Readers, 2008
Hardcover, 320 pages
ISBN-10: 1416950583
Interest Level:  Grades 5-8
Reading Level:  5.2
Lexile: 830L
Newberry Honor & other awards
Two stories intertwine as the events in The Underneath unfold.  While continued hope    presents itself in both stories, loyal friendship and tragic deceit are the impending results.  Appelt keeps readers on the edges of their seats as the powerful forces of love and hate intermingle and bring the story to a fateful end.

What Is Modern Fantasy? 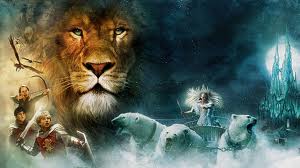 What Is Modern Fantasy?

Kiefer (2010) defines fantasy as "a traditional folktale that has an identifiable author.  Many themes apparent in modern fantasy are rooted in traditional folklore and in the human psyche. They raise the questions of good versus evil and the meaning of life.  They satisfy the modern-day hunger for myth".

Good fantasy might benefit children in that it helps children better understand themselves and the real-life struggles they may face.  Not only can fantasy reveal new insights, it can also foster the development of children's imaginations.  However, some people argue against the benefits of modern fantasy and believe it leads to evil behavior, including but not limited to satanism.  Lloyd Alexander (via Kiefer 2010, page 286), however, states, "We call our individual fantasies dreams, but when we dream as a society, or as a human race, it becomes the sum total of all our hopes.  Fantasy touches our deepest feelings and in so doing, it speaks to the best and most hopeful parts of ourselves.  It can help us learn the most fundamental skill of all--how to be human."  In doing so, we invent, create new ideas, find alternative ways of life, etc.  Maxine Greene believes, "It is imagination--with its capacity to both make order out of chaos and open experience to the mysterious and the strange--that moves us to go in quest, to journey where we have never been" (Kiefer, 2010, page 286).

Fantasies are written at several levels and include elements such as animals, toys and dolls, small worlds, strange characters and events, unusual worlds, magical powers, the supernatural, time shifts, and kingdoms. High fantasies are often told in a series and often include themes at the core of life.  With recurring themes and motifs, they are the most complex.  Heroes on a mission are often featured.  While science fiction falls under the fantasy umbrella, it differs from fantasy in that it speculates about what might happen if our present  scientific knowledge was used in certain ways. It is valued for its ability to facilitate use of the imagination and to consider ethical and social implications of scientific issues.

For additional information about modern fantasy, follow this link, and browse the web links listed below.