What Four Roles Did People Take During the Holocaust?

If we are not to be victims, then our only choices are to be perpetrators of evil and injustice, indifferent bystanders who allow it to exist in our world or rescuers who act to end it.  The triangle illustrates the actions people took when confronted with the evils of Nazi Germany.  Only a small percentage of the population was comprised of perpetrators; but an even smaller portion, less than 1 percent, made a decision to become rescuers.  Most people settled on the role of bystander. The result was catastrophic. Please note that these are not hard and fast categories sometimes these categories crossed over and some victims acted as rescuers or perpetrators.

Perpetrators -Perpetrators were the people who committed and executed the crimes against the various victim groups, mostly the Jews. This group of people carried out the policies of discrimination and murder set forth by the Nazi Party. Adolf Hitler is considered the chief perpetrator; however, people from all walks of life and educational levels were perpetrators. This group had several reasons for committing these crimes including a desire for power, financial gains, displaced anger, an ideology of racial cleansing, and “following orders.”

Rescuers/Helpers - This group was the smallest group of people during the Holocaust, but the most courageous. Rescuers took great personal risk to help members of the persecuted groups, especially the Jews. These were ordinary people who became extraordinary. Rescue took many forms including leaving food by ghetto fences, hiding one person (or more) in their home for up to several years, and creating bureaucracy to help Jews to emigrate. Rescuers were politically driven, morally driven, or had established a relationship with a person or group. They did not view Jews and other victims as the enemy, but as human beings. 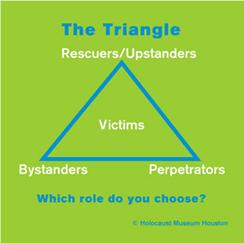 The Terrible Things by Eve Bunting